A Beehive explained with diagrams

A beehive isn't as complicated as it seems, once you see it in action! Honey bees live in large groups of 30,000 to 60,000 bees called a colony. In nature, this would often be a hollow tree. 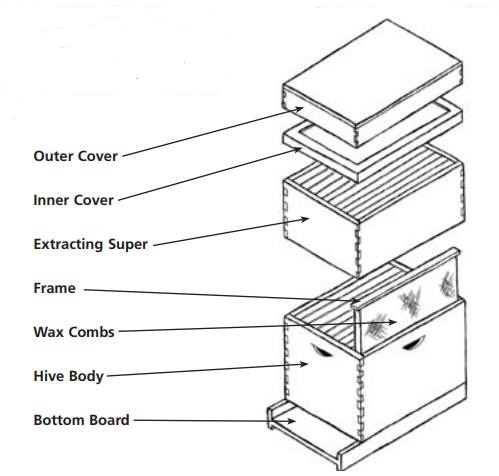 Beekeepers supply wooden hives to house the colony. The interior of these hives include wax combs (sheets of 6-sided cells) that the bees will use to make and store honey. Combs are also used to store pollen and as nurseries for bee larvae. The combs are built vertically, side by side.  Thousands of cells make up each comb. The bees produce wax by secreting it in small flakes from the underside of the worker bees’ abdomens. The bees then chew the wax to make it pliable and build one or more combs.

Nursery cells are used over and over again. Worker bees clean each cell carefully before the queen lays another egg inside. Pollen is stored close to the nursery area in order to feed young bees. The outer portion of the comb is used for honey storage.

Bottom board - wooden stand on which the hive rests. Set bottom board on bricks or concrete blocks to keep it off the ground.

Cell - a hexagonal wax chamber built at a slight upward angle by honey bees for brood rearing and storing pollen and honey.

Colony - a group of animals living together.

Comb - a structure made up of hexagonal wax cells.

Extracting Super - the area of trays of combs that will be removed to extract the honey,

Frames and foundation - wooden frames that hold sheets of beeswax foundation and are imprinted with the shapes of hexagonal cells. Bees use the foundation to build straight combs.

Hive - a home to a colony of bees. It is a large wooden box (called a "super") that holds 10 frames of comb.

Hive body or brood chamber - laThis space (the brood nest) is reserved for the bees to rear brood and store honey for their own use. Either one or two hive bodies can be used for a brood nest. Two hive bodies are common in cold winter regions. Beekeepers in areas with mild winters successfully use only one hive body.

Propolis - a sticky substance collected from trees by bees and used as glue to construct and seal parts in the beehive and protect the hive from the elements.

Wax - the substance excreted from the glands located on the underside of a honey bee between its abdominal segments.

Vertical wax combs - the area that is left alone for the honey bees to raise their young and store pollen and honey that they need to live on.