Killer Bees: All you need to know about Africanized Honeybees

Killer bees are coming!! Yeah, we've been hearing that for 30 years now. Turns of a good cold winter stops them.  So here's the latest.

What is a killer bee? (aka, Africanized honeybee)

African honey beeThere was this "genius" of a Brazilian geneticist, Warwick Kerr, who got the bright idea to import them to the Americas in 1956. His rationale was that if the tough African stock would breed with gentle European honeybees, it would to produce a new breed of honey bees, which would be less aggressive than the wild African bees but which would be more productive than European honey bees (EHB) in Brazil's tropical environment. . Kerr took 63 live queens from South African beekeepers to a quarantine area at an agricultural research station near Rio Claro, where 48 queens survived till the next year. 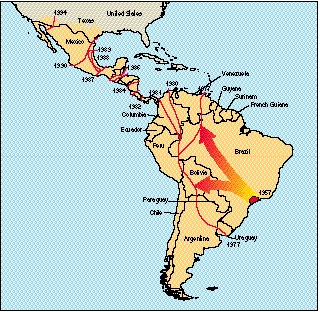 Breeding them with with European drones, Kerr and his associates produced a number of first generation hybrids, now known as Africanized honey bees, or more commonly as "killer bees" (Not to be confused with the late John Belushi). . Eventually their stock of Africanized honey bees was down to 29 which were kept in hive boxes equipped with queen excluders. These excluders are meant to keep the queens from exscaping the hive.

According to Kerr, in October of 1957, a local beekeeper (Marty Feldman, perhaps?) wandered by, noticed the queen excluders and removed them. That released 26 Africanized honey bee queens with small swarms into the nearby forest. Kerr hoped the escaped bees would either perish in the wild or mate with European honey bees and eventually lose their African characteristics. Yeah, right, Dr. Fraankestein. (Pronouces "Fronkensteen").

Of course, it wasn't but a few years after that when reports of wild bees aggressively and relentlessly attacking farm animals and humans began to surface inm the nearby areas.  By the early 1960s, it was clear that the Africanized honey bees were moving quickly into other parts of the country and taking over from the gentle bees. Swarms of Africanized honey bees move 60 miles or more at a time rather than the 3 or 4 miles that a gentle honeybee moves, By October 1986, they reached Mexico.

Spread of Africanized Honey Bees in the United States. 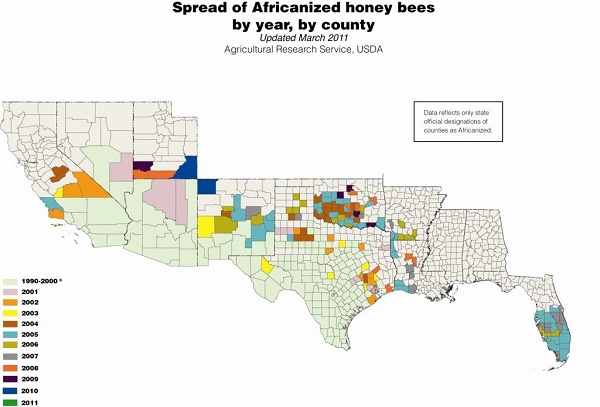 The Africanized honey bee was first detected in the United States in 1990 in south Texas (Figure 2). For three years, their distribution was confined to the southern part of that state. In 1993, however, the AHB was detected in Arizona, and by 1995, they were detected in New Mexico and southern California. The bees then spread north, and by 1998 they were found in Nevada. In every state where they became established, the bees continued their migration northward over the next few years. By 2004, the bees had migrated through Texas and were detected in the southern most counties of Oklahoma.

For reasons that are yet unclear, the eastward spread of the AHB stalled in Texas for many years. This unexpected break in home-range expansion was hypothesized to be a result of climate or other ecological factors. Nonetheless, by 2005 the AHB expanded eastward from Houston. Most recently, the AHB has become established in western Louisiana, southwestern Arkansas, and southern Florida (Figure 2). It remains unclear how the AHB entered Florida, given the lack of positive AHB findings along the gulf coast, thus it seems likely that the bees were independently introduced on cargo ships through commercial shipping ports.

What to expect in the future

It appears that the cold winters or other factots have largely constrined the bees to their current areas, with occassional forays beyond.

What to do if attacked by Africanized bees