Beeswax is the wax made (obviously) by bees.  The bees use it to construct their cells in the hive's combs, for honey, eggs and larvae , royal jelly, etc. For centuries, beeswax is used in candles by melting it, pouring into molds, that hold a wick. Beeswax makes great candles; due to its higher melting point than most paraffin waxes (most of which melt between 480 and 68C) beeswax candles remain straight at higher room temperatures. And if the  wick is sized in proportion to the diameter of the candle, they are less likely to drip than candles made from other materials.

But Beeswax also has many other uses:

How is Beeswax Made?

It starts with the bees, of course! Young bees, still in the hive, help in the construction of the hive. They chow down on honey and then rest, almost motionless for 24 hours while, 8 wax glands on the underside of their abdomens secrete small wax platelets. (see photo at right) . The glands of worker bees convert the sugar contents of honey into wax, which oozes through the bee’s small pores. The bees scrape these off and chew them into pliable pieces with the addition of their saliva, which contains a variety of enzymes. After being chewed, the wax is then added to the hove to make the hexagonal cells of the honeycomb.

Beekeepers scrape the top parts of the cells and the wax caps on the honey cells off when they extract the honey. This produces a very high quality, light colored wax. Light colored broken combs are used for the next lower

Comb and wax pieces are washed to remove honey and other debris .

Next, the wax is melted down, either

Beeswax candles are often made by dipping wicks repeatedly in melted wax, or by rolling thin sheets of beeswax around a wick.

Composition and properties  of Beeswax

Virgin beeswax is an opague white in color. As the bees use it, it becomes darker from dirt and debris.

Beeswax is a soft, inert natural compound  that is not soluble in water and resists many acids. Organic solvents like gasoline, will dissolve it.

Beeswax is made up of many compounds, 300 or more. A chemist will tell you most are saturated and unsaturated monoesters, di-esters, saturated and unsaturated hydrocarbons, free acids and hydroxy polyesters. Most of the wax, 56% is made up of 21 major components.  But don't left these chemical sounding names worry you, beeswax is actually safe to eat as it largely passes through undigested and has been approved as an ingredient in human food in the USA. Of course, you could eat enough of it to cause a blockage, so don't overdo it. (see this article) 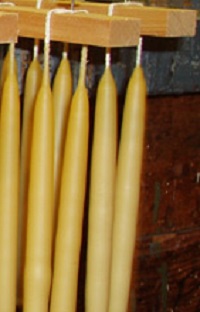 Top five beeswax producers (data from 2012, in tons) are: