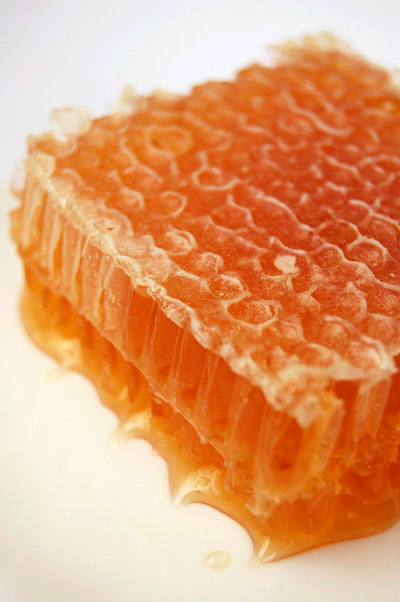 The internet is filled with websites touting magical honeys from New Zealand or Malaysia, or even just around the corner that will cure almost everything. While many of these are exaggerated, there is some truth in many of the claims. Honey is said to be an immune system builder and has both antioxidant, anti-bacterial and anti-tumor properties.  Here is an objective review of the health benefits of raw honey, with references to sources.

Honey is a by-product of the flower nectar collected by honeybees and stored in the upper aero-digestive tract of the honey bee, which is then concentrated in wax cells in a beehive by dehydration. Honey is 80% water, and 19% sugars with minerals, vitamins and enzymes that vary based on the source flowers. Honey allergies are extermely rare, so it is safe for everyone over 1 year old. Honey has been used both as food and medicine since 8000 years ago.

Honey has a lower glycemic index than ordinary table sugar.  The average glycemic index for honey is 55±5, while table sugar is 68±5, This means its sugars are absorbed into the bloodstream more slowly resulting in less of an insulin spike. For people with type I and type II, this can be significant. Studies of diabetic rats have found Tualang honey to play a role in regulating blood sugar. Of course, honey is still metabolized as a sugar, and shouldn't be over-eaten.

Treating a cough or sore throat

Research shows that receiving a 2.5-mL dose of honey before sleep has a more alleviating effect on coughs than over-the-counter cough medicines like DM and DPH.  And it has been well established, for thousands of years that a spoon of honey helps relieve sore throat symptoms.

Antibacterial properties and treatment of wounds

Honey has been demonstrated to have antibacterial properties and help in healing wounds. This is due to a combination of the osmotic outflow and a bioactive effect of honey. The enzyme glucose oxidase of honey provides glucose to leucocytes, which is essential for respiratory burst to produce hydrogen peroxide leading to antibacterial activity of macrophages. The acidity of honey further aids in antibacterial activity.

A study of 139 children found that honey did a better job of easing nighttime coughs and improving sleep than both the popular cough suppressant dextromethorphan and the antihistamine diphenhydramine (Benadryl).

Another study of 105 children showed that buckwheat honey also outperformed dextromethorphan in suppressing coughs at night. Studies in Italy, using wildflower honey, and Israel, using eucalyptus, citrus and labiatae honeys, found that the gooey stuff outperformed placebos in reducing both nighttime coughs and sleeping troubles in children with respiratory infections.

Consuming honey has been used to treat and protect against gastrointestinal infection such as gastritis, duodenitis and gastric ulceration caused by bacteria and rotavirus.

In the lab, Tualang honey has been shown to disrupt breast, cervical and skin cancer cells. That is not the same as a human trial, but honey holds promise as an anti-cancer agent and a preventative for heart disease.  The effects seen in the lab are theorized to be due to honey's high levels of antioxidants that fight oxidative stress and inflammation, which underlie many cancers and cardiovascular disease.

In addition to antibacterial and antifungal effects, natural honey has been shown to have antiviral effects.

Honey has been reported to have inhibitory effects on fungi. Pure honey inhibits fungal growth and diluted honey appears capable of inhibiting toxin production (13). An antifungal action has also been observed for some yeast and species of Aspergillus and Penicillium,